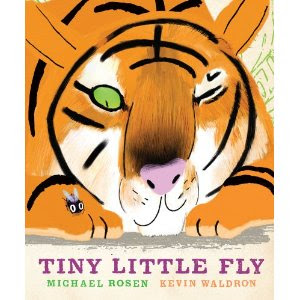 Allan Ahlberg’s and Bruce Ingram’s Everybody Was a Baby Once (Walker, £9.99) takes traditional figures from nursery rhymes and fairy stories – Cinderella, Little Jack Horner, Little Bo Peep – and puts them in contemporary and accessible contexts: in this case a football team. These poems are full of infectious, song-like qualities, and they will provide young readers and listeners with access to archetypal characters – the witch, the naughty boy, monsters – in humorous and often quirky contexts.

A Bit Lost by Chris Haughton (Walker, £11.99) Illustrations, text and layout combine magnificently in this engaging, and humorous story of a baby owl’s separation from its mother.

Monsters of Men by Patrick Ness (Walker, £7.99) The manner in which “war makes monsters of men” is powerfully dissected in this final adventure of teenagers Todd and Viola.

On the Road with Mavis and Marge by Niamh Sharkey (Walker, £11.99) A cow and a chicken hilariously share a red bicycle en route to north Antrim, the Antarctic and outer space.

The Boy Who Climbed into the Moon by David Almond, illustrated by Polly Dunbar (Walker, £9.99) This touching story of Paul, who sees the moon as a hole in the sky, marvellously celebrates freedom and friendship.

The Midnight Zoo by Sonya Hartnett, illustrated by Jonathan McNaught (Walker, £8.99) Two brothers and their baby sister, tramping across a ravaged countryside, encounter a zoo. An exquisitely written, illustrated and produced novel.

Tiny Little Fly by Michael Rosen, illustrated by Kevin Waldron (Walker, £11.99) An elephant, a tiger, a hippo – and a little fly. Their relationships, in word and picture, constitute a stunning picture book.

Slog’s Dad (Walker Books, £8.99), a tale of loss written by David Almond (author of Skellig ) with art by the comics veteran Dave McKean, is a fine example. The sad, evocative story is mostly told through Almond’s prose, but McKean’s pictures don’t just illustrate the events in the story. Rather, they amplify and add to them, bringing an extra dimension of meaning to a story already packed with emotion.

Joann Sfar’s adaptation of The Little Prince (Walker Books, £15.99 ) is now available in English. Sfar is a legend on the French comics scene, and only an artist of his stature and calibre could adapt the equally legendary Saint-Exupéry classic. This simple tale of a prince from the stars who falls to Earth has moved and enchanted generations of children. Sfar’s art is bright and full of life, simple and occasionally grotesque when Saint-Exupéry’s allegory calls for it. This adaptation is a fine way to revitalise the magic and wisdom of the little prince.

Full Review page (without the many Walker Books illustrations which appeared in the printed edtion) HERE
Posted by Conor at 9:35 PM No comments:

On the Road with Mavis & Marge, Niamh Sharkey ' Hilarious'

The Midnight Zoo Sonya Hartnett 'Incredible story about what it means to be free'
Posted by Conor at 1:21 PM

Walker Books at the Irish Craft and Design Fair 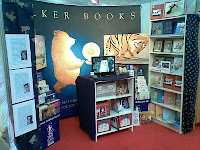 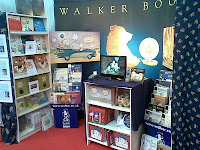