PJ edited the footage that I took over the course of his five days painting in the window of Hodges Figgis Bookstore in Dublin, Ireland and this is the result.  The event was covered on RTE News and also on radio.
The painting depicts 'The Ghost of Christmas Past' from PJ's interpretation of Dickens'
A Christmas Carol
You can see PJ prepare the canvas and do the initial drawings and colour washes on his website here.
Posted by Conor at 3:04 PM No comments:

Disney commission means 40 animation jobs in the bag
GENEVIEVE CARBERY
The Irish Times
21 Dec 2011
IRISH ANIMATION studio Brown Bag films has been commissioned to make a new series for Disney Junior, creating 40 jobs. The Happy Hugglemonsters is based on an Irish book series and will air on the children’s channel in more than 150 countries from...read more...

Tech Tags: The Irish Times newspaper HOME NEWS
Posted by Conor at 10:29 AM No comments:

Niamh Sharkey to get Global Audience 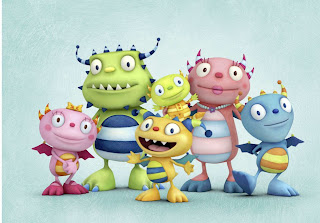 Disney EMEA today announced that it has greenlit a brand new CG animated pre-school series, The Happy Hugglemonsters. Set to premiere on Disney Junior from autumn 2012 and air in more than 150 countries worldwide, the series follows the adventures of fun-loving, five-year-old Henry Hugglemonster, the middle child in a happy, wacky close-knit monster family – The Hugglemonsters.

Produced by twice Oscar-nominated animation studio, Brown Bag Films in Dublin, Ireland, The Happy Hugglemonsters is the latest series being developed and produced by Disney’s London based production hub. Led by Beth Gardiner, Vice President, Production, Disney Junior, the Disney team is working with Brown Bag Films to deliver the 52 x 11 minute series - developed from a series of books created by Niamh Sharkey called “I’m a Happy Hugglewug” and published by Walker Books. The illustration style of the books is retained in the series’ CG animation.
Niamh Sharkey said
"I am thrilled to be working with Brown Bag Films to bring my characters to life; the creativity, enthusiasm and care they bring to the project is mind blowing. Making this show for Disney Junior is a dream come true, and to be able to create this show in Ireland is the icing on the cake. I know my monster family is in safe hands!”
Cathal Gaffney, co-founder and CEO of Brown Bag Films said:
“We are delighted to announce the production of this series, it is great to work with home grown talent like Niamh Sharkey and to bring an original idea like this to a global Disney Junior audience is hugely satisfying for all involved”, “This series will see over 40 additional staff employed full time in Brown Bag Films over the coming 18 months and demonstrates how the creative economy has such an important role to play for Ireland.”

Mags Walsh (Childrens Books Ireland) talks with Niamh Sharkey and Chris Haughton at OFFSET
Getting your Childrens book published from OFFSET on Vimeo.
Posted by Conor at 2:45 PM No comments:

The Street Performance World Championships Where's Wally event has been officially recognised by Guinness World Records as the new holder of the World Record for the most Where's Wallys gathered in one place.  The record now stands at 3,872.  Congratulations to everyone who took part and who also raised lots of money for charity in the process. 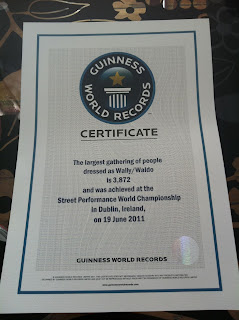 You can see all of the photos of the event and lots of updates here.
Posted by Conor at 12:32 PM No comments: 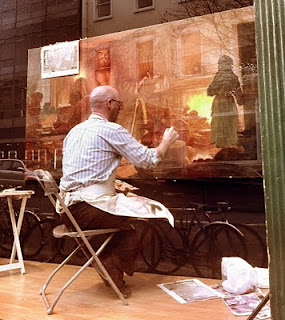 Mary Brigid Turner (Hodges Figgis) interviews PJ Lynch after his Artist in Residence event in the Hodges figgis Window.  Click here for the interview on the Inis Website
A big 'Thank You' to all the staff at Hodges Figgis for staging this event.  Especially, Mary Brigid and also Stephen who set up the window and completed the adjacent windows with the printed images from A Christmas Carol.