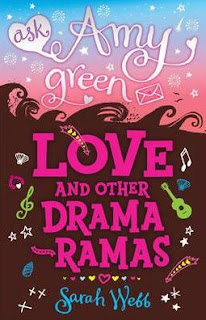 Amy Green is back in her fourth book, (published Thursday Sept 1st) solving problems for pre-teens everywhere! Amy turns events organizer to plan the best hen-do ever for her mum. Meanwhile, her usually coolheaded aunt Clover is freaking out about going away to college and Amy's best friend is having major boy trouble. Just as well Amy's on hand to sort everything out! Divorce, step-parents, new babies, romance, rejection and friendship in a crisis...Ask Amy Green tackles some of the most troubling pre-teen issues.


The first three Ask Amy Green books will be republished with this fantastic new cover style.

National Book Tokens currently use an image by Niamh Sharkey from On the Road with Mavis & Marge on their childrens Book Token range. 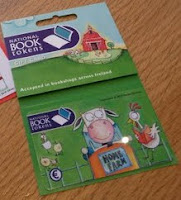 Fantastic selection of new picturebooks from Walker. Can you spot the Irish bunch? A Bit Lost by Chris Haughton, Tiny Little Fly by Kevin Waldron and On the Road with Mavis & Marge (winner of the Irish Book Award 2010) by Niamh Sharkey

Peepo by Janet and Allan Ahlberg
The nigh-on perfect picturebook for very young children. Memorably repetitive and rhythmical text, circular peepholes to anticipate what comes next and pictures packed with sly detail. One of the many things I admire in the Ahlbergs is that they understood that children are visually literate long before they are textually so; that simple language does not necessitate simple illustration. Janet's illustrations stimulate close observation, conjecture, discussion; thus a book of few words becomes a shared and rich reading experience.

Burglar Bill by Janet and Allan Ahlberg
My three fun-loving criminals were delighted by a character who helps himself to what he fancies and gets away with it. For quite some time, the words, "That's a nice hat/ball/fishfinger, I'll have that!" introduced various uproars in our household. In the end, of course, Bill gives everything back and goes straight. As did we, more or less.

The Lorax by Dr. Seuss
It's never too soon for a parable about deforestation and its consequences. Or for messing about with language. This is the tale of the regretful old Once-ler, whose capitalist greed led him to fell a fine forest of Truffula trees and use their soft tufts to knit useless Thneeds. (Very infectious, is Dr. Seuss.) Lovely, rubbery, rhythmical language, and a message you can't argue with. Good to have your children marching up to bed chanting, "I am the Lorax! I speak for the trees!"

Stanley Bagshaw and the Mafeking Square Cheese Robbery by Bob Wilson
So memorable is the rhyming text of this one that, before too long, all I had to do was hold up the book and the children would recite it.

The BFG by Roald Dahl
Like many adults, I'm ambivalent towards Dahl; like most children, mine weren't. I was leery about Dahl's lickspittle portrayal of HM the Queen in this story – was he angling for a knighthood, perhaps? – but it's a great read-aloud, largely because of the word-mangling voice of the Big Friendly Giant and the genuine scariness of the Fleshlumpeaters (described with characteristic relish). The farting is a major plus, of course. For several weeks, everything my kids drank became frobscottle and they devoted themselves to defying gravity by means of turbocharged flatulence. A book to read with the windows open.

Wolf Pie by Andrew Matthews
Food, especially mad food, always goes down well in book form. In Matthews's story (illustrated in lively fashion by Tony Ross) the king and queen, like plutocratic Hong Kong gourmands, demand continual culinary novelty. Their exhausted chefs quail. ("Quail?? Had that! Had that!") Eventually a young underchef teams up with a band of wolves to provide the fat tyrants with a bite more than they can chew. A short, taut and funny book with some splendid writing. One of my favourite bits is when a bunch of runaway chefs (what's the collective noun for chefs, I wonder?) take refuge in a tree, where they hang like sad pale fruit. "Isn't that a great image?" I'd say. To which the kids would reply, "Shut up, Dad, and get on with the story." Respect ...

The Wind in the Willows by Kenneth Grahame
A must on any list. Grahame's masterpiece has been rerendered (and frequently travestied and cheapened) in so many forms that it's easy to forget how literary and magical a text the original is. Yes, it's occasionally arch, self-indulgent, even child-unfriendly, but this adult reader almost always found some new little nugget of irony, a felicitous phrase, an unsuspected insight to enjoy. I love particularly the immensely long sentence, recapitulating English history, that follows Toad being given an immensely long sentence for reckless driving and cheek. (How deliciously these ideas coil in upon themselves!) My children liked to challenge me to read that passage without drawing breath; I never could. Regrettably, I was usurped as a reader aloud of the book by Alan Bennett's peerless audio version. Tom fell asleep to it well into his teens. Sometimes I snuck into his bedroom to listen, to sink into the story's pillowy dangers and relish the cheek of Bennett giving Toad the voice of Tom Stoppard

Treasure Island by Robert Louis Stevenson
We used the Gollancz edition with the beautiful illustrations by NC Wyeth. On the first reading I overdid the "Oooh-arr me hearties" piratical voice, on the grounds that if you can't camp things up reading to your children at bedtime there's no point going on. Then I realised that Long John was much more sinister, or sinisterly sympathetic, if you tone him down; if you make him almost kindly. This is another classic that has become overfamiliar in other media; the original is rather rich in moral ambiguities, and sometimes discussions of these took us dangerously close to the Ten O Clock News.

A Christmas Carol by Charles Dickens
Yes, we did read this at Christmas for several years. It was a ritual; I make no apologies. Quite the opposite: it would be a good thing if Rowan Williams, the archbish, gave up reminding us that Christmas is about the birth of our Redeemer rather than shopping and instead urged all people of good will to gather under the Christmas tree with A Christmas Carol. Sadly, my spirited reading was supplanted by the Muppets' video version. No, not sadly, actually. The Muppet Christmas Carol is brilliant, Rowan. Honest.

Oliver Twist by Charles Dickens
The other Dickens novel that children are most likely to enjoy. Mind you, you'll do well to get through it in under a month. I could never be an actor. I'm too easily embarrassed. I do like doing voices, though, and Dickens – an actor manqué himself – writes great voices. If time travel were an option in the Guardian travel supplement, I'd pay good money to be in an audience when Dickens was reading. I'd like to know how well he managed the myriad voices he deploys in his books. I was pretty good but inconsistent. "Dad," Lauren would complain, "this is the Artful Dodger. You're doing Nancy." The strange thing (in the sense of "not funny at all") is that Oliver Twist, a story about abandoned and unloved children resorting to street crime in order to survive, seems urgently contemporary.
This is edition available from Walker Books in October

Email ThisBlogThis!Share to TwitterShare to FacebookShare to Pinterest
Labels: http://www.blogger.com/img/blank.gif 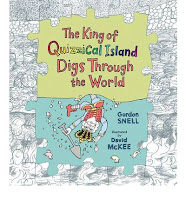 Gordon Snell's sequel to the King of Quizzical Island - The King of Quizzical Island Digs Through the World tells the story of the brave King's latest attempt to prove that the world is round. Told in snappy lyrical verse this is a brilliant read aloud for boys and girls aged 3+ Illustrations by David McKee, (King Rollo films- Mr Benn, Elmer)
The Whispering Witches whimpered;
The Owl got quite hysterical.
He said, "Supposing you dig through the world
And find it isn't spherical?"


Mary Murphy's Utterly Lovely One is a 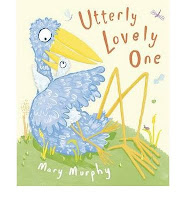 beautiful celebration of a Mother's love for her little one. Brimming with affectionate language, positivity and with such energy too, it is a perfect read-a-loud for the very young (and Fathers can read it too!) There is a freshness to Mary Murphy's illustrative style that is unparalleled and the design and production quality of this book show off the talents of Walker Books' art department.
Posted by Conor at 5:13 PM 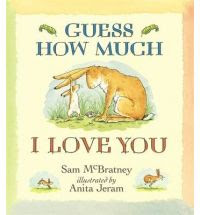 Guess How Much I Love You, written by Irish author Sam McBratney and illustrated by Anita Jeram has sold in excess of 26 Million copies since its publication in 1994.
Disney has just announced that they will broadcast 52 x 11minutes episodes of Guess How Much I Love You; The Adventures of Little Nutbrown Hare on its Disney Junior network in Australia and New Zealand from September 2011.
To date, the animated series has been picked up for broadcast in Germany, Canada, Finland and Sweden. The series will also be seen on Disney Junior in the United States.

Full details here
Posted by Conor at 10:00 AM No comments: